Netflix | Immigration Nation and how you can help the undocumented

So I wanted to talk about this docuseries because it was on delay thanks to ice/govnt and now it won’t be on netflix forever, I assume.

Well, if you miss it, I will let you know about it here, because it’s really too heartbreaking to watch.

Episode 1: A separated father and her daughter

I personally have problems when I’m alone, like some kind of anxiety from sleep if my husband isn’t next to me. He’s like my only true friend and makes me feel safe. Now on this episode we see this father and daughter who were separated. I couldn’t understand how this is happening today… but when you think about it, it’s OUR FAULT. This is happening to people who aren’t us, but what if we were born in their place? What would we be doing? Would we cross a border to find a better life, would we risk everything? Some of these people, like this father and daughter, did not know that they might be separated from migrating. The girl reminded me of myself.

On this episode I was worried for the girls health. You already know what happens to girls and to women no matter what age, so what makes you think something didn’t happen to these kids who were separated from their parents? Adults like to abuse their power, and no one will save these kids if they are being abused and have no one to stop them. 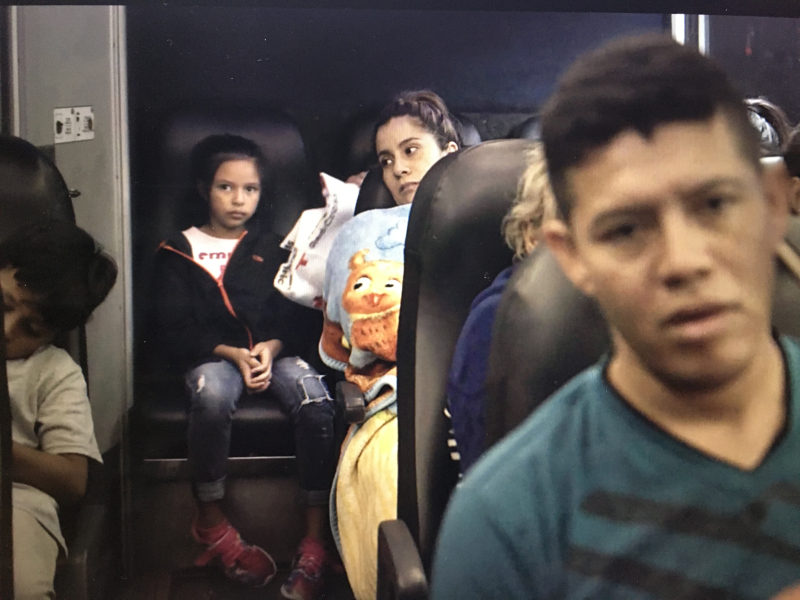 Are these not children worth fighting for? Were we not once children? Are children to be punished because their parents weren’t 100% sure what would happen trying to cross a border for a better life?

This image above is where the girl is reunited with her father. She looks .. MESSED UP to say the least. I will never forgive the people who do this to these innocent people. Just like i will never forgive hitler, or any other genocide leaders, child molesters, pedophiles etc. These are the children we should be saving. They are punished for really just being born in the situation they were born in and we have a duty to help our fellow humans because we would also want help if we were in their situation.

Dad (interview 1, crying): “When I was at ICE, they told me that they were going to separate us forever. She was going to stay here. I don’t know in whose hands.” Dad (interview 2): Discusses how his daughter saw her mother murdered, how he took her to a psychologist who told him “You must always be close to her.” Reunion, Daughter (interview 1): Recounting how officials said “That I would never get to see you again, that they are going to move me from home to home. I told them I would see you again but they just told me that I would never see you again, and I cried.” (from lawprofessors.typepad.com)

I actually didn’t watch the whole scene where he reunited with his daughter because I was crying so hard. My dad was deported but I’m not 100% sure why. He doesn’t tell me the reasons why and I believe he likes to talk about positive things so he won’t tell me his story. I felt so upset seeing this scene because as an adult, it’s hard to know my dad isn’t with us in this country, so just imagine this young girl having to deal with something so harsh so early in her life. First her mother’s murder and then being told she will never see her dad again. This girl could have been me and it hurts to see her go through this.

Tommy Hamm. The episode says it all. A white man making a business off of exploiting undocumented workers. These people were given work, but were never payed. They literally made whole houses for these white men and were told off if they ask for their money. Thanks to Saket Soni from resilienceforce.org for building this community of workers to help them have a voice.

Actually they were threatened to get the cops called on them if they keep asking about where their money is. This episode really teaches us as documented people to stand up for those trying to make a living here. We should try our best to support others, because in another world, we might be in their place.

This is how I see lots of racist people, they love undocumented people when they work for them and do things for them but turn their backs just because they aren’t abiding a ridiculous law. Same thing happened to Jewish people and still happens to them today. Yes there are still Nazis in the world, don’t forget that.

This episode was so telling of BP. The way to agent helped the Guatemalan man ABOUT TO DIE and later talks about how fun the area is to work in.

These people don’t care about human life at all. Is it really that shocking?

Anyways, here’s the man who walked 15 days from mexico to arizona. He was abandoned by the guide, and left for dead. He ate cactus to survive. In this episode it is explained how this is what the border patrol WANTS. More deaths to them means it’s working, people will stop coming. But as we can see in the episode, it’s a lie. Many will continue to die, but that is the risk they are willing to take to get away from what little life they have at their home country.

If you watch immigration nation from start to finish, you will see who is a modern day nazi. They lie to the public and smile and think of people as business and profit and a game of cat and mouse. Just like nazis did to the jews, some of these agents bring people to their death, in the cases where immigrants are escaping violence in their home country or from abusers, climate change (in guatemala) or no jobs. It’s history playing over and over until we help make a change. Like the organizer Stephanie said, go out and vote for people like her, who cannot vote! It’s the least you can do if you aren’t able to protest or be outside detention centers.

Everyone is an immigrant

So I believe everyone is an immigrant here since the only people who are originally from what is now the united states is native people. White people aren’t from here, asian people aren’t from here and unfortunately black people were forcefully brought here. Spanish people conquered us Mexicans so now we don’t know what’s what. But I know for a fact that white people have no right to tell anyone where to go or what language to speak or what is legal or illegal when they stole land.

It’s crazy how people KNOW that and how their ancestors are from the UK or whatever english speaking country and still want to deport people who are the original people from here. I mean, their argument is “win a war” it’s all this bs about man made walls to help keep the u.s safe, but there’s so many non immigrants doing the killing here so basically they’re just xenophobic. It’s ridiculous.

All I can say about this, is to share to others, talk to your friends and families, show up at deportation centers, record illegal detaining and ice harassing random people. In this series, many times the people being taken away are NOT violent criminals. It’s just people escaping violence at home, like the Salvadorean grandma (who was deported and is probably dead now), and mostly everyone who just needs to make money and not able to in their hometown thanks to the u.s. If you don’t know why every country is broke, just see how the U.S is connected. I mean, look at the countries being bombed for no reason, and you expect them to stay in their country?

Only we can help!

Did you watch Immigration Nation? What did you think about it?

Are you a virgo like me and INSIST on doing something after feeling these peoples pain somehow lol like I can’t help but really try to feel what others go through… I need to work on that because it’s really draining and harmful to my health. If you want to watch something similar to this, I recommend

Living Undocumented, it’s just as sad but can educate us more on why it’s so unfair to block people who are really trying to get help themselves by migrating to what they think is a better country. Stopping people from doing what’s natural  isn’t going to stop murders, crime etc in the U.S. If that were true there wouldn’t be murders going on left and right here in the u.s and they’re always by non immigrants or just american people.

Maybe if America worked on mental health and prioritized universal health coverage and fair wages, maybe they wouldn’t be hell bent on committing crimes to make a living here (like selling drugs). Maybe if the U.S stopped bombing other countries then people wouldn’t have to leave their homes and uproot their whole familes. Stopping Immigration does not make sense, it’s never done anything for anyone except fill the pockets of those who see people as “collateral” like shown in the series.


Disclaimer
Content on this blog is owned by Soyvirgo unless stated otherwise. Please contact me to delete photos that are yours!
Credits: rec, pixels.
Blog edited with ♡, created by KhalilThemes